Accueil News The Cry Of Gaïa on Metal Temple

The Cry Of Gaïa on Metal Temple

Equinox – The Cry of Gaia 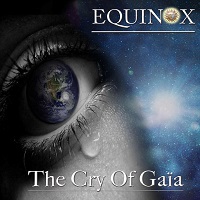 Equinox
The Cry of Gaia
by MarcusTheRocker at 27 March 2015, 11:55 AM
Share this on Facebook | Share this on Twitter
Aside from all the heavy hard-hitting stuff I listen to and review, I do have a soft spot for Symphonic music from time to time as it can often add layers of epicness to a song especially in video games but that’s a subject for another day. When combined with something like Heavy Metal, Symphonic music can make the already heavy sounding music sound even more epic then it would otherwise usually be and I’m here to see if the band featured in this review has achieved just that with their music.

The band in question is called EQUINOX who are from France and they have a debut album out called “The Cry of Gaia” and the band use a combination of Metal and Symphonic music in their sound and as I already stated, I am partial to a bit of that from time to time as I think the two can work together very well. In the past I’ve heard a range of different styles of Rock music from France but this album marks the first (I think so anyway) Metal release from the French and I’m here to see if it’s any good or not.

Having read the band’s bio while listening to this album, I was quite impressed by each of the member’s resumes as they have had experience working on various projects and performing in various bands so obviously they have a lot of experience to bring to the table. The symphonic elements in their music consists of strings, brass and wood instruments, pianos and choirs alongside the usual guitars, bass, vocals and drums. All of these elements definitely sound like a recipe for success and epic music – but are they?

Well I am happy to say that it is a recipe for success as all those elements combined with the experiences of each member of the band produce some very impressive sounding music as the symphonic elements add layers of epicness to the already heavy sounding music and in a few places you get shivers down your spine as they can sound so epic, it’s not even funny but I mean that in a good way of course if you catch my drift. On top of the epic-sounding symphonic elements, the music sounds quite clear as well and you can hear each part very clearly for the most part allowing you to appreciate the work that gets put into the music.

Despite all the good points I listed though, there are a couple of things which do bother me a bit. I’ll start with the vocals which are by no means bad as there are a few moments in a few songs where they do impress you despite the somewhat hit and miss performance varying on the song, but sometimes you can’t hear or understand what’s being sung as the singers voice is mostly buried underneath the music which is a shame.

The next thing that irks me is the QUEEN cover they put on this album as – yes they did try to stay true to the original melodies but – there were a few bits of it which were just unnecessary, such as the faster drumbeats as well as a couple of other things, which ended up annoying me even though I am not a big QUEEN fan myself but there are some of their songs I do like and I think this cover strayed away from the original version a bit too much and it’s songs like this which should be left untouched and left to the original artists to play on their own.

Bottom line, “The Cry of Gaia” from EQUINOX isn’t bad for the first French Metal release I have heard since becoming a music journalist but there are a few things which I felt the band could have improved on to make this better but the use of the symphonic elements is a very good idea and I do appreciate and respect the arrangements that were done for the music but the vocal production and the QUEEN cover are things I just wasn’t overly impressed with as there is potential here but I think given a few tweaks, that potential will be fully realized and put to good use.