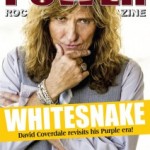 « French metal band Equinox is very much the sum of its parts : four well travelled gents who’ve worked with everyone from Paul Gilbert to Angra. The result is a supeb debut album with razor-sharp playing and plenty of crops genre appeal.

There’s a distinctly European vibe here, as you might expect. Think Nightwish with Yngwie on guitar and you’re not a million miles off : choral harmonies and neoclassical shredding are staples for most of the record. You’ve a bit of journey-esque hard rock thrown in here, too, tracks like « I Had a Dream » and « Amber » as anthemic good radio friendly as anything the Californians might put out. But then there’s that cover: a perhaps ill-advised reworking of Queen’s « The Show Must Go On » : if ever there was a song that should be sacred, it’s that. Yet the Equinox boys do an admirable jock, injecting a healthy dose of speed metal into the mix, turning the whole thing on its head. They’re a gutsy lot, you know.

« The Cry Of Gaia » boasts the kind of swagger you’d expect from a band that’s been touring for decades. The production is faultless, the songwriting effortless. It’s an epic, rabble-rousing affair that’s well worth your time dand dollar. 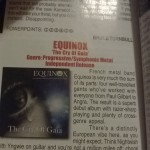 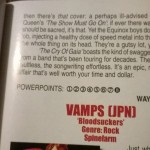